Welcome! I currently represent District 39 in the Kansas House of Representatives. District 39 is located in Shawnee and Lake Quivira, Kansas. Compare the common-sense positions of Rep. Donohoe vs. his opponent's radical agenda: 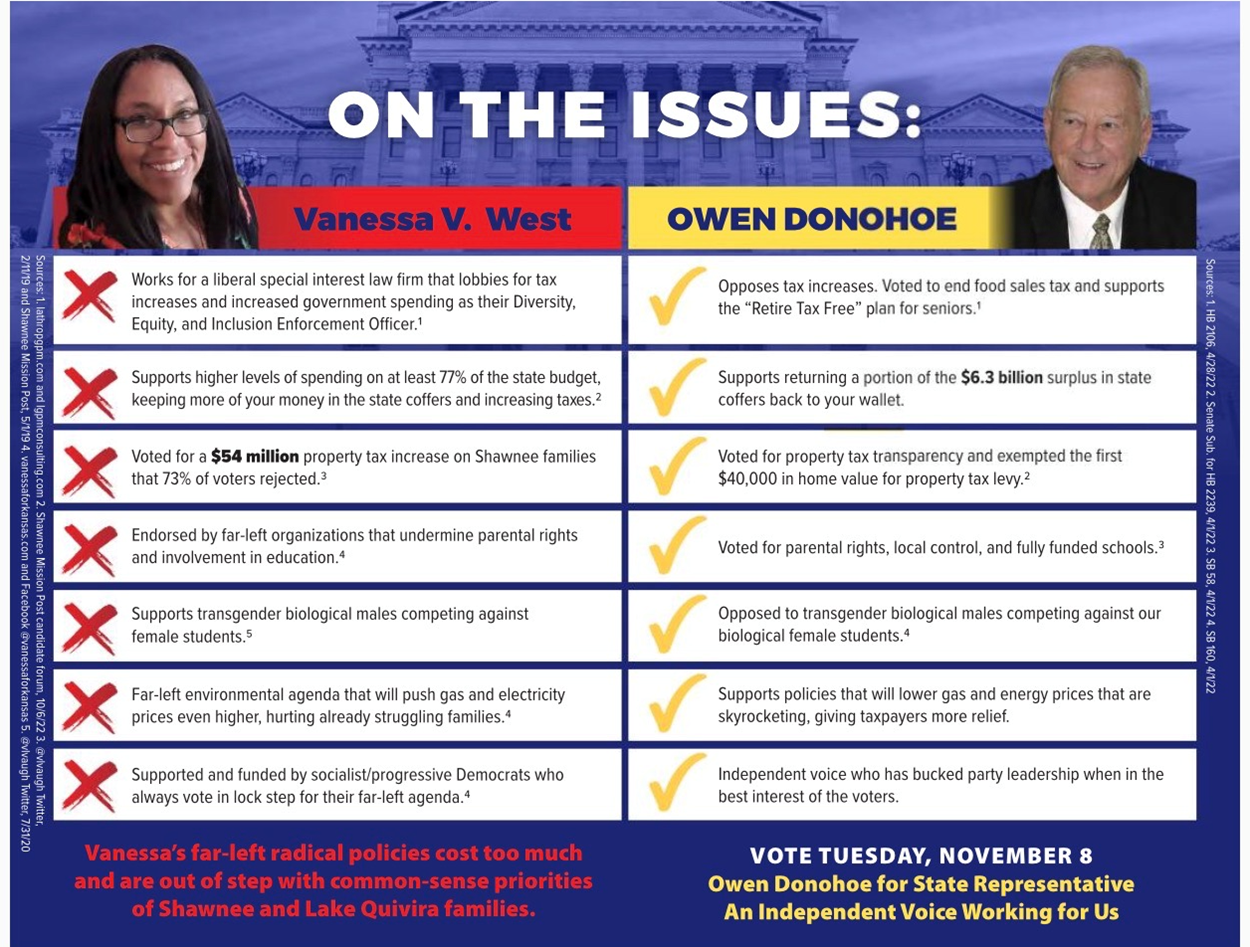 In the 2021-22 Kansas legislative session, I've been working to help Kansas individuals, families and businesses emerge from the pandemic with strength and resolve. Here are some key accomplishments:

•  I have led the effort to eliminate the waiting list for services for more than 5,000 Kansans with intellectual, physical and developmental disabilities.
•  Fully funding education and working to restore educational progress among students affected by pandemic shutdowns.
•  Supporting programs that help the economic development and future growth of our state.
•  Fighting for more tax relief - so you'll have more money in your paycheck and to help people retire tax free.
•  We have addressed laws that help prevent convicted criminals get away with crime or be released too soon.

I did exactly what I promised to do as a legislator. You can continue to count on me by re-electing me.

As many of you know, the Kansas legislative session addressed a number of important issues for families and individuals in the Shawnee & Lake Quivira areas. Since then, I have been highlighting the most pressing needs that need priority attention in the next legislative session. As your representative in western Shawnee/Lake Quivira, I’m prepared to lead the effort to address these unmet needs and remain a good steward of taxpayers’ money.

Specifically, I will continue to work to address these key priorities:

• Avoid tax increases - I have always been a Champion of the Taxpayer and have demanded accountability
• Eliminate waiting lists for social services - services for persons with disabilities and mental health issues should be the first services funded by the legislature
• Protecting the sanctity of life to the extent possible under law
• Eliminate pensions for legislators - KPERS pensions should not be given to part-time legislators. I have refused it.
• Improve the operation of the KS Unemployment office - too many Kansans did not receive their benefits during and after the pandemic.
• Utilize a portion of school districts' reserve funds ($4+ billion) to stabilize K-12 education funding and encourage more focus on student outcomes and school accountability. See my plan to fully fund education without raising taxes.
• Create job growth in Kansas through industries such as manufacturing, agriculture, defense and medicine.

See my plan to grow the economy without raising taxes. 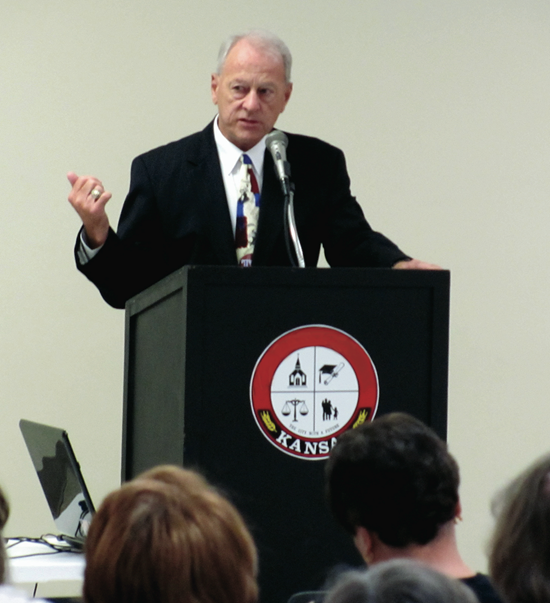 Kansas has been through a lot in the last decade -- financial tumult, legislative division and threats to our values. Now we face growing inflation and taxes. Rep. Owen Donohoe is a leader who can set a better course for the future of our taxpayers, families, small businesses and most vulnerable citizens. A leader like Owen Donohoe in the Kansas House of Representatives is getting things done.

"The legislature has lost its focus on representing the taxpayers," says Rep. Donohoe, explaining why he is seeking re-election.

I inform constituents regularly of developments in the legislature through my newsletter and email updates. I encourage you to sign up to receive news updates here.

A message from Rep. Donohoe:

I appreciate your support of District 39 citizens and I am upholding the conservative values you elected me to represent in Topeka, as your 39th District Representative in the Kansas House. Let's keep the lines of communication open -- email me with your thoughts at owen.donohoe@house.ks.gov anytime.


I HAVE EARNED ALL THE MAJOR STATEWIDE ENDORSEMENTS: 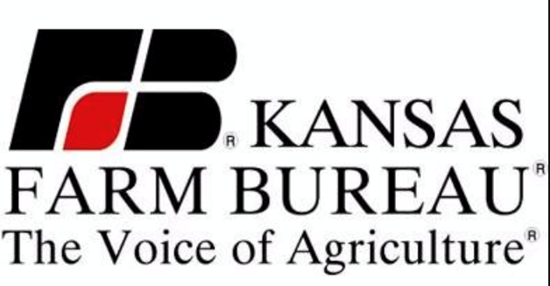 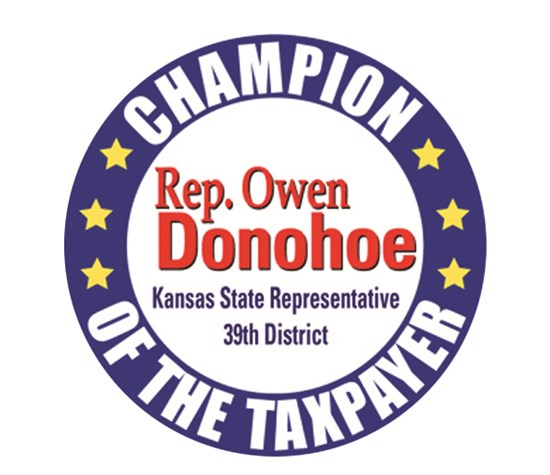 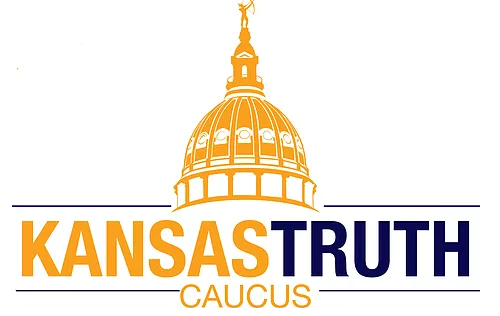 I Want You to Retire Tax Free in Kansas

Kansas is the 3rd worst state in the country for retirees, according to a new independent study from Kiplinger's. I've heard it in neighborhoods throughout the 39th District -- the tax burden for Kansas retirees is just too high. It's the one of the main reasons Kansas lost 5,200 households in 2021 -- the 10th most in the U.S.! That's why I support -- and will fight for -- the Retire Tax Free plan in Kansas.

This plan would provide relief to retirees who live on fixed incomes and struggle with both the rising costs of inflation and shrinking retirement investments due to market losses. It would also encourage more retirees of all income levels to remain in the state - or move to Kansas - rather than move to a different state. Learn what's included in the plan.

I am delighted to share that I have again received the endorsement of NFIB (National Federation of Independent Businesses) because of my proven record of results in fighting for small businesses in Kansas.

The Legislature returned for two veto sessions to wrap up those items that were still pending from the regular session, consider any vetoes, and update the budget based on new financial information.

The Legislature has concluded the majority of its work for the session, though a few key items remain to wrap up during the Veto Session. We spent the last week of session working through differences in versions of bills between the House and Senate. All bills passed up to this point have been presented to the Governor for her consideration. The Legislature will have the opportunity to consider veto overrides on any bill the Governor decides to veto when we return to Topeka on April 25. Read the full recap by clicking on the title.

The second half of the session is underway. The Legislature completed the first half of work on February 23, ahead of the Turnaround deadline, when non-exempt bills have to be considered in their house of origin. The Legislature returned to action on March 2 with House committees taking up bills sent over by the Senate. Work continues on big issues, including the budget, taxes, and redistricting.

I Want You to Retire Tax Free in Kansas